How did you come up with the idea for a campaign like #TogetherScienceCan and why is the project important right now?

The basic idea behind the platform is to give a voice to international collaborations in science that are so important for scientific progress. The ultimate goal is to use the platform as a tool to foster collaboration and to tackle problems arising in today’s changing political climate. Thus, it was important to us to not make this a Wellcome Trust only initiative but to include organisations around the world such as the Max Planck Society or the Helmholtz Association in Germany.

Over the last year and a half, we have been watching all these developments around the world and have been seeing lots of volatility and change. This includes seeing the rise of a more inward looking agenda in several countries and this is starting to have an impact on the scientific world. At the same time, we as the Wellcome Trust have grown a lot over the past few years and thus we realized that there is more that we can do with other partners – both organisations and individual researchers – to emphasize that great science only happens when you cross boundaries and work across national borders. We realise that science relies on international collaboration and it is important that we speak up for this.

Who is the campaign trying to reach?

Of course, first and foremost it is for scientists and the main goal is to give them a voice. However, we hope that by them voicing their opinions and showing how science works across the borders we will reach a wider public as well. It is important to make this connection and we can only make an impact if we connect the general public with scientists. We want it to be an international movement and we want to spread the scientific knowledge around the world.

How can people get involved?

We are still in the very early stages of the campaign but we have started with providing tool kits for both organizations and individual researchers. Anyone can use those to promote the idea behind the campaign. However, that’s just the starting point and we have deliberately set it up as a campaign that has room to develop. We want people to be part of it and don’t want too many fixed rules and guidelines. We want our community to tell us what is important to them and that has been working really well so far. 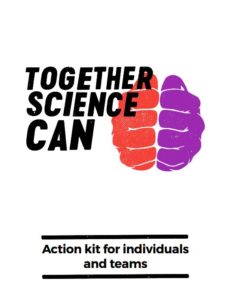 However, now that the campaign has been running for a while we want it to get to some of the core issues we have identified together. We have started doing that with one project that we have started together with the Royal Society here in the UK. It is called the Future Partnership project, and is about the UKs and the EUs scientific collaborations after Brexit. We are currently trying to use #TogetherScienceCan as a means to open up the discussion on this issue. Another problem we are tackling in the near future is migration and issues like free travel for researchers as this has been a real issue in recent years. Thus, we will try to collect evidence on those issues and will try to enrich the picture.

It isn’t really about becoming an NGO but about getting the issues and problems out there and getting people from all over the world involved. So basically, the campaign and its goals are an ongoing project. We want our partners to raise issues relevant for their environment.

We’ve seen a real interest and enthusiasm from people interacting with the platform, so far from over 85 countries. We have got the sense that the platform is welcome and timely, and there is real enthusiasm to develop it to address some of the top issues affecting scientists and researchers at the minute.

Where do you see the platform going in the future?

For the most important outcome is that the platform makes a meaningful difference on the issues affecting international scientific collaboration, and helps to raise the argument in favour of open circulation of ideas and people across borders. For us in Wellcome I think it is also a great way of fostering our partnerships with this wider community of organisations in order to do many more things together as a group. We all want science to flourish and this movement and all those organizations working together has the potential to change things and change policies that aren’t working for the scientific community.

Do you observe a general change in the way science is doing outreach?

I think the imperative for the scientific community to speak more actively about the importance of science and the way it can help with the great challenges the health as well as communicating its values has become more important in these volatile times. This is the case in the UK and the US but also in many other countries, and being more open about it has become more important.