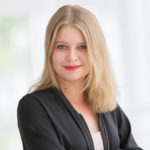 My “baptism” into science communication happened through FameLab, an international science communication competition. The concept is simple – you have three minutes to present an interesting science topic, without any slides, but with any props you can find or make yourself. You are judged on the three Cs: content, clarity, and charisma. After winning the local and national competition, I had the chance to represent Romania at the finals in Cheltenham, UK. For me, the most significant part of participating in FameLab was all the training we received before each stage of the competition, which was essentially my intro into science communication.
Fast-forward to the beginning of my PhD, everything I had learned through FameLab helped me considerably to get involved in science outreach activities in addition to my research. I discovered Pint of Science, a global-local festival that brings scientists into pubs to have a drink with non-scientists and explain their work to them. Later on, I got involved in other amazing initiatives like Native Scientist, science slams, or letters to school children dreaming of being a scientist. Communicating science helped me to remember why I love science during the tough phases of my research project. In the final stage of my PhD, I realized that communicating science is actually much more fulfilling to me than working at the lab bench. Now, I am a Recruiting and Communications Manager for an independent research institute, where networking and communicating science to scientists and non-scientists are my daily business. Ladder, springboard, or carousel? In my case, a slalom probably comes closest.

What I love about working in communications is that it keeps my brain in a constant stream of ideas, information, and inspiration – however this is also part of the challenge. One of the biggest challenges is working with many different people, with different backgrounds, on a daily basis. Of course, this is also the most interesting part of the job. In a diverse group of people, reaching consensus on delicate topics like (science) communication requires a lot of empathy and patience. In my opinion, it is important to acknowledge that communication in general is not as trivial as it may seem. We all communicate all the time, in one way or another. This makes it seem easy and accessible – but we tend to underestimate the importance of learning and relearning to communicate. Good communication requires effort, patience, and dedication. Switching career paths from research to communications made me more aware of this.

What do you wish for the future of science communication?

First and foremost, I wish for science communication to be recognized as a valid career path in more places around the world. I hope the number of training opportunities will continue to increase, for both scientists and non-scientists. Also, possibilies to study science communication at university level should become more common. There are increasingly more resources for science communication in English, but similar resources in other languages are still scarce. That is why initiatives such as Native Scientist are even more important. The Native Scientist workshops invite researchers to talk about their work in their native language to immigrant pupils who usually don’t have a lot of formal education in their mother tongue. Scientists are used to communicate in English, as it is the most common language in their research environment. Communicating in their mother tongue can actually be a challenge. Native Scientist is a great way to encourage international scientists to communicate science in their mother tongue, thereby making science more accesible to everyone.

From your point of view, how is science communication different across countries?

Science communication is currently growing organically worldwide, even more so after the start of the Covid-19 pandemic. Still, the science communication and outreach landscapes look very different from one country to another, even within Europe. In many countries, the development of science outreach activities was rather informal, mainly driven by voluntary initiatives rather than in an institutionalized fashion. From my perspective, the very first science communication organizations or institutions successfully established in a country inadvertently shaped all the initiatives that followed.  Thereby, they also influenced the way science communication in general is perceived in that particular country. For example, Pint of Science is emblematic for science communication in the UK, whereas countries like Portugal had the Gulbenkian Institute of Science to actively foster a science outreach culture. In the past couple of years, the Romanian Science Festival has been pivotal in developing a concept for delivering science communication to high school students and beyond in my home country. No matter the approach or the country, I think it is important that we support each other and try to learn from other countries, so we can all become more proficient and versatile in communicating science – not only in English speaking communities, but all around the world.

Flavia-Bianca Cristian is a molecular biologist and science communicator, currently working as Recruiting & Communications Manager at BioMed X, an independent research institute in Heidelberg, Germany. Originally from Transylvania, Romania, Bianca has been living, studying and researching in the USA, Portugal, the Netherlands and Switzerland before moving to Germany to pursue a PhD. In addition, she is city coordinator for Pint of Science Heidelberg, a mentor for the Romanian Science Festival and a coordinator for Romanian in Heidelberg for the Native Scientist network.